Jazz Over The Rainbow

Enjoy an evening of music inspired by Oz and the Judy Garland era presented by Freddie Hill and the Oz Club of Bondi over a delicious waffle.

Favourites like Over The Rainbow, Get Happy, Zing Went The Strings Of My Heart and On The Sunny Side Of The Street were a staple of Garland’s concerts and will feature prominently in the evening’s repertoire.

The Oz Club of Bondi (originally the Hot Club of Bondi) was formed back in 1992 when acclaimed composer/arranger/trumpeter Freddie Hill (then with the Gaiety -now the Shawnuff- Swing Band) met jazz violinist Morris David, at the North Bondi Golf Club. A distinctive semi-acoustic sound is produced by the guitar/violin quality reminiscent of Django Reinhardt and Stephane Grappelli combined with the "little big band" input from such luminaries as Duke Ellington, Count Basie, Benny Goodman and Lionel Hampton. The band has been featured at the Manly Jazz Festival, as well as enjoying residences at the Soup Plus restaurant and Doyle's at the Watson's Bay Hotel.

Oz-some fact: Over the Rainbow was almost cut from the movie. Some executives from MGM thought the film was too long and wanted it removed as it slowed down the action too early in the movie! It went on to win Harold Arlen & Yip Harburg an Oscar in 1939 for Best Original Song and is ranked the greatest movie song of all time by the American Film Institute on the list of "AFI's 100 Years...100 Songs”. 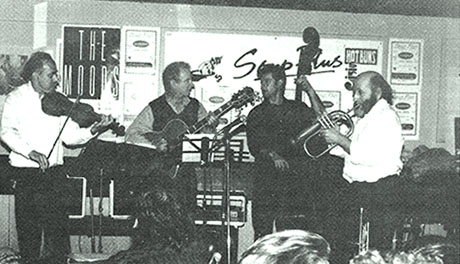 The Square Waffle is about providing Campbelltown area with a Destination Venue. It is a  restaurant with high standard Modern Australian cuisine where you can hang out with friends, enjoy a delicious meal or have a great party and check out the live music by some of Sydney’s best professional musicians and entertainers.